The Reality of Mankind -- The Parable

When learning Buddhism, the most important thing to know is the purpose of listening to its teachings.

First of all, Buddhism is of course the teachings of the Buddha who lived 2500 years ago. Buddha is also known by the name Sakyamuni Buddha.

Sakyamuni explained for us why we listen to Buddhism with a famous parable that shocked even the renowned Russian writer of War and Peace.


"I have never heard any parables which reveal human reality
as genuine as this Eastern fable."
--Leo Tolstoy

It was during the time of Sakyamuni, a king by the name of Shoko, came to a Buddhist lecture. Sakyamuni was pleased at his attendance since it tended to be difficult for people in power to listen due to their vanity and high position.

Because of this rare visit, Sakyamuni decided to preach about the purpose of listening to Buddhism in a famous parable called:

“The Reality of Mankind”

Billions of years ago, a traveler was trudging all alone across a vast wilderness. It was a lonely evening in the fall, and the cold wintry wind swept across the bitter plain.


The traveler was hastening his pace toward home when suddenly, he spotted some white objects scattered along the roadside. He picked one up, wondering what it could be and to his horror discovered it was a human bone.


“Now why would there be human bones scattered around here?” the traveler wondered as he felt an eerie feeling come over him.

He cast his eyes around but saw neither a graveyard nor a funeral home nearby. Seized with a very chilling feeling, the traveler couldn’t even take a single step forward.

As he kept staring at the white bones, he heard a weird growl and the sound of ominous footsteps coming at him.

“What's that noise ahead?” the traveler wondered.

To his terror, it was a huge tiger, fierce from starvation.


In an instant, he realized the meaning of the bones all around him. Travelers who had journeyed here like himself had become the tiger’s prey, and these bones were the remains of their dead bodies. The tiger lunged at him.

Realizing his life was in danger, he ran back down the road he had come from with all his might.

However, no matter how desperately or quickly he could run, a human being is no match for a tiger at full speed. There was just no way he could outrun this fierce predator.

And so the distance between them drew closer and closer. He could even hear the tiger’s violent snorts trailing behind him.

Somewhere in his haste, the traveler made a wrong turn leading him toward a steep cliff. “Oh no!” he cried. “I’ve taken the wrong road!” But it was much too late to turn back now.

Now there was a large pine tree that grew near the edge of the cliff in front of him, but he knew well it was useless to climb it for safety, because tigers are expert tree climbers.


The frantic traveler while running around in circles  – not knowing what else to do – managed to find a lifesaver. It was a wisteria vine hanging from the base of the pine tree leading down the precipice.


“At last! This will do the trick!” The traveler quickly lowered himself down the vine just in time, narrowly escaping the hungry tiger's jaws. It growled with intensity and clawed at him from atop the cliff.

“Thanks to this vine, I’m safe for now,” he thought with a sigh of relief.

Thinking he was soon to be out of danger, the traveler looked down coolly, only to gasp out of surprise and terror.

What he saw was a vast, bottomless ocean with swift currents dangerously forming a whirlpool.


But not only that... amidst the whirlpool were three dragons – a blue dragon, a red dragon, and a black dragon – waiting for him to fall. Their mouths were wide open ready to devour him.

Seeing how dreadful each dragon was, the traveler tightened his grip on his thin vine. 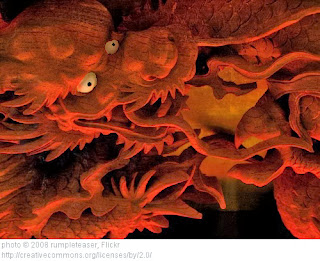 He felt that he was now in the worst situation imaginable.

Even so, after hanging around for a while, he began to feel hungry. The traveler looked around for something edible.

Upon gazing upward, he discovered what horrified him the most. It was more frightening than either the menacing tiger or the three deadly dragons below him. He involuntarily cried out from the sheer terror.

Two mice, a white mouse and a black mouse, had appeared above him and were now taking turns gnawing at the vine, his only lifeline. The traveler’s face turned pale and his body was shaking in fear. He shook the vine rigorously to shoo the mice away, but to no avail.


But a strange phenomenon started occurring as he shook the vine. With each shake, something had come dripping down.

The traveler caught some of it with his hand and to his utter astonishment discovered it was a delicious-looking drop of honey. Instinctively, he licked it and found it to be the most delicious honey that he had ever tasted in his life.

He wondered, “Why would honey be dripping down from above?” And as he looked up again he saw a beehive on the branch from which the vine hung.


Hoping to taste it once more, he shook the vine again and as he hoped, more honey came dripping down.

“Once more. Just once more.”

The traveler kept on licking the honey intoxicated with delight, and forgetting all the dangers he was in from the tiger, the three dragons, and even the dreadful black and white mice. All he had in mind now was how to obtain more honey.


When Sakyamuni Buddha’s sermon reached this point, someone in the audience shouted.

“Noble Sakya! Please stop!” It was King Shoko. “I am too frightened to hear this story anymore. How can this traveler be so foolish? How could he ever forget he was in such danger, simply being distracted by little drops of honey?”

“Please listen more carefully, King,” Sakyamuni Buddha replied. “This traveler refers to you. He represents not only you but the whole human race.”

At these words, a clamor arose among the entire audience and everyone took to their feet from the shock of Sakyamuni's bold statement.

The Buddha went on to describe in detail how the traveler in this story represents the reality all human beings even to this day.

Find out what each symbol means in the next Reality of Mankind series right here on this blog.
Posted by mirrorofdharma at 3:52 PM