Christianity teaches that God is the Creator. He created all beings and everything on this world in six days and rested on the seventh day. He also made the soil, and from it, he created the human being. God made the human being in the image of himself. Then the human race was put as ruler over nature and the creatures of Earth.

But you could ask the question -- "Then who made God?"

Bertrand Russell, philosopher, mathematician, and historian, wrote about this in his article called Why I Am Not a Christian. Below is an excerpt:

Perhaps the simplest and easiest to understand is the argument of the First Cause. (It is maintained that everything we see in this world has a cause, and as you go back in the chain of causes further and further you must come to a First Cause, and to that First Cause you give the name of God.) ... I may say that when I was a young man and was debating these questions very seriously in my mind, I for a long time accepted the argument of the First Cause, until one day, at the age of eighteen, I read John Stuart Mill's autobiography, and I found there this sentence: "My father taught me that the question 'Who made me?' cannot be answered, since it immediately suggests the further question 'Who made god?" That very simple sentence showed me, as I still think, the fallacy in the argument of the First Cause. If everything must have a cause, then God must have a cause. If there can be anything without a cause, it may just as well be the world as God, so there cannot be any validity in that argument. ... There is no reason to suppose that the world had a beginning at all. The idea that things must have a beginning is really due to the poverty of our imagination. Therefore, perhaps, I need not waste any more time upon the argument about the First Cause.

***
Buddhism teaches that the way the universe exists on a grand scale -- is like a circle. In a circle, there is no beginning or ending point. It just continues endlessly.

Continuing this idea, Buddhism identifies the four major phases of material energy in the universe. The first stage is called Jo in Japanese. It means to form. This is when a cause and its condition come together to make an effect. The second phase is Ju, or to stay. Here the effect is in a state of being. The third phase is called E, or to separate. The cause and condition breakdown and fall apart. The fourth phase is known as Ku, or emptiness. Now the broken-down cause and condition turn into a fading energy. (Note: Even though these phases have been numbered here one through four, there is no set determined order as this process is continual and ever-changing.) 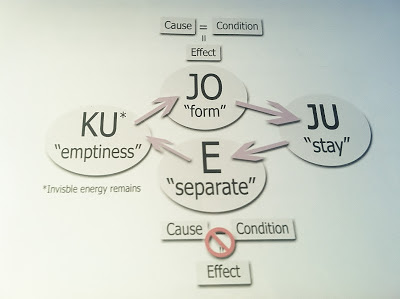 Let's take for example a set of prayer beads. Each individual bead is combined onto a thread in order to form the prayer beads. It stays for a while and is used for joining the hands together. If the string separates, the beads scatter because they lose the condition which makes them united. Finally, when the materials begin to decompose or dissolve, they approach a state of emptiness. But even when the material loses its form, it doesn't mean it disappears in this world. Its invisible substance remains as energy.

This invisible energy can be further explained with Einstein's famous equation E=MC2. Einstein proved that all the materials which have the most mass contain energy and because of the law of conservation of energy, their energy remains even as they lose form.

The Big Bang Theory states that the universe began from a black hole of nothing and has expanded from that point outward to form the universe these past 12.5 billion years. Many Christians believe that God created this phenomenon, but many scholars have come to refute this assertion. Stephen Hawking, theoretical physicist and cosmologist, is just one of them.

Hawking stated it clearly in these three quotes from an interview:

"Because there is a law such as gravity, the universe can and will create itself from nothing."

"Spontaneous creation is the reason there is something rather than nothing, why the universe exists, why we exist."

"It is not necessary to invoke God to light the blue touch paper and set the universe going."

Scholars also pose that although the universe is expanding it will eventually shrink. This is just an assumption until further evidence can be found. From the Buddhist perspective, it is nothing special because this last state is actually just the dissolution stage of Ku preparing for the next formation stage, Jo. 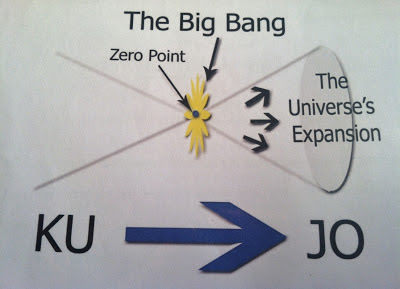 These four stages represent the Buddhist perspective of the world on an epic scale.

Buddhism explains that all other phenomena that occur within the universe operate within the Law of Cause and Effect. This universal principle, also known as the Law of Karma, is actually what determines our fates. We should study the Law of Karma frequently, as it is the foundation for Buddhist thought.

Posted by mirrorofdharma at 3:00 PM