Buddhism is the study of happiness. It was founded by Siddhartha Gautama, a prince in India who was born in 560 B.C. At age 35, he became enlightened.


In Japan, he is more widely known by the honorific title, Sakyamuni Buddha. Sakyamuni means "Sage of the Sakyas," and Sakya was the name of his family's clan. Buddha means "Enlightened One" or "Awakened One." Sakyamuni's teachings were later compiled into 84,000 written works known as sutras. These lessons lead us toward becoming enlightened.

We are all moving forward on this path to enlightenment. You may have heard the word nirvana to describe this state of absolute happiness.

The teachings of the Buddha are known as the Mirror of Dharma because they reflect our true nature to us. They do this in order for us to achieve a state of everlasting, supreme joy.

All branches of Buddhism freely welcome anyone to attend services regardless of affiliations to other religions. In this way, it is a religion that promotes harmony with everyone.

All Buddhist philosophy revolves around an understanding of the Law of Cause and Effect. In short, this principle is condensed in the following three lines:

By understanding this law deeply, you can accept responsibility of your actions and transform your future destiny by performing as many good deeds as you can now.

Beyond these introductory concepts, many differences arise in each school's method of instruction of how to ultimately arrive at absolute happiness.

There are two major categories within Buddhist schools, Theravada and Mahayana.

Theravada Buddhism arose in Southeast Asia and is the oldest school of Buddhism. It is also known as the small vehicle because only a few can follow the difficult practices. This teaching is centered around benefiting yourself and being happy yourself above others.

Mahayana Buddhism became popular in India, China, and Japan. It is known as the great vehicle because it aims to include as many as possible in achieving enlightenment. Its principle philosophy could be stated as "my happiness makes you happy." It follows the core concept: benefit self, benefit others.

Sakyamuni Buddha passed away at the age of 80. Nine hundred years later, a figure known as Ryuju-Bosatsu was born. His arrival was foretold by Sakyamuni. Ryuju-Bosatsu helped clarify the essence of the Dharma. He was also known as Nagarjuna and is respected in India and many places around the world as "Little Buddha."

Ryuju-bosatsu taught that the purpose of Buddhism was not to benefit only yourself but to benefit all people and make everyone happy. This concept of benefit self, benefit others helped to increase the popularity of the Mahayana school throughout Asia.

Within Mahayana Buddhism, there are two kinds of schools, the difficult path and the easy path. 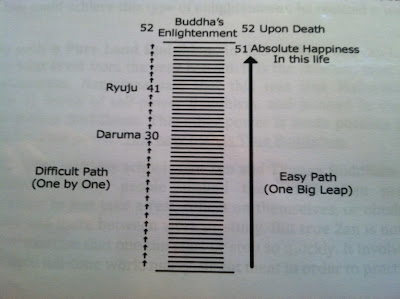 Nagarjuna had a very strong will and painstakingly made it to the 41st level one by one. Only two other figures have been able to do such extreme ascetic practices. Once at this level, he realized he couldn't go any further. Nagarjuna learned at this state that it was too difficult to obtain Buddhahood in the way Sakyamuni had. Because so few could achieve this type of enlightenment, he discovered it was not true Mahayana.

The easy path is Pure Land Buddhism. In this method, one can jump all the way up to the 51st level from the very bottom. It is the shortest, most direct path toward enlightenment. Nagarjuna said that this was true Mahayana. He then abandoned his 41 levels of self-power Buddhism, and jumped to the 51st level through other-power Buddhism. This other-power is made possible through the wonder of Amida's Vow. This easy path is True Buddhism.

The difficult path includes schools like Zen and Tibetan Buddhism which both practice meditation. Many people around the world often practice their meditations in order to just take a rest, reflect on themselves, or obtain calm for a few minutes here and there between work and study. But true Zen is not this simple type of relaxation exercise that one can start and stop so quickly. It involves very hard work. You can't hold full-time work, marry, or eat meat in order to practice it fully.

Another historical person within Buddhism is Bodhi-Daruma. Often he is depicted in round-shaped figurines known as Daruma dolls. The reason for this shape is that Daruma practiced ascetic training for nine years staring at a wall without moving.

As a result of this activity, he lost both his arms and legs due to poor blood circulation. This extreme type of meditation has no room for Disneyland, music, going out, eating meat, or marriage. It is a concentration with all of one's will power to eliminate all desire. One must observe the mind and all the thoughts it harbors.

Thus the true teaching of Zen is to climb the ladder of enlightenment by eliminating all desire. Such a person must seriously dedicate their whole life to such a practice and have very little to no free time.

After all his efforts, Daruma established the Zen school at attaining only the 30th level of enlightenment. This practice is so rigorous that one has to cut off all ties to the normal world, foregoing career, loved ones, family, and all the things we enjoy in life.

It may be a way to calm the mind, but for Pure Land Buddhists, it is not suited well for attaining Buddha's enlightenment. In such a difficult path, only a few can be saved.

The easy path is Amida's Vow, the Pure Land Way. Once we are 100% sure of Amida Buddha's salvation, only then can we be truly happy in this life. This type of other-power faith allows us to jump to the 51st level of enlightenment, just one under Buddhahood, and while still alive. Then after death, we are born in the Pure Land and attain enlightenment there.

No type of rigorous training or ascetic practice is required for this absolute form of happiness. We only have to listen to Amida's Vow from a true Buddhist master. The current living master of Pure Land Buddhism is Kentetsu Takamori from Japan. A few of his works published in English are displayed below.

To know True Buddhism clearly and concisely, make all efforts to listen to his teachings directly in order for you to obtain the purpose of life as quickly as possible.

In this Mirror of Dharma blog, I am sharing what I have learned from his lectures in order to bring awareness and exposure to the Pure Land way and so that one and all may obtain absolute happiness in this lifetime.
Posted by mirrorofdharma at 3:48 PM